As the author of articles in a series in the “Heavy Lift & Project Forwarding International” magazine, Andre van der Steen, lead structural engineer at  Eager.one, considers the effect of elasticity on SPMT load stability.

There is no standard formula for determining the stability of self-propelled modular transporters (SPMTs). Instead, it is calculated using a common rule of thumb based on practical experience. This rule is quite simple: if the tipping angle is lower than the theoretical minimum tipping angle, the transport will be safe. The minimum tipping angle that is most commonly used is 7 degrees.

What is remarkable is that not everyone is aware of the fact that these rules of thumb are affected by the elasticity of the complete transport. For example, in Figure 1 the transport is simplified to a mass positioned on a trianSular construction that has a top angle of 14 degrees. The transport will tip if it encounters a camber of 7 degrees, irrespective of the mass of the transport. 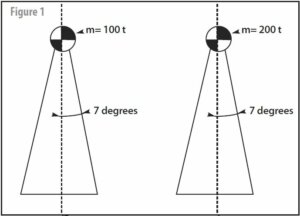 In the next example, the influence of elasticity is illustrated by means of the springs underneath the transporter. It is unclear what camber this transporter can drive without tipping. It is clear, however, that the mass of the transport plays an important role now. The transport on the right (200 tons) will tip earlier than the one on the left (100 tons), simply due to the influence of elasticity. In addition to this, it is very clear that both transports will tip far earlier than at 7 degrees. If the elasticity is infinitely weak (theoretically), the load tips at 0 degrees. 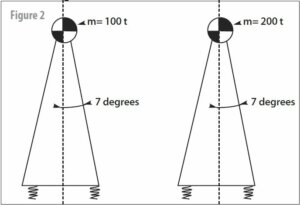 The purpose of this article is not to suggest that the current rules are useless. They have been used for decades and are based on practical experience. The minimum tipping angle of 7 degrees is supposed to cover most transports and a variety of elasticities.

On the other hand, we must be honest with ourselves: accidents still happen even with transports that meet the requirements of the commonly used rules. In some cases it is human failure, and in others the cause remains a blind spot. 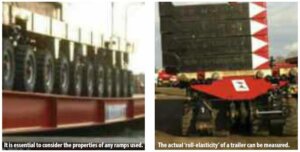 Theoretically, the only way to know whether a move needs special attention concerning stability is by calculating deflections. There are several factors that can dramatically increase deflections during an SPMT transport operation:

All in all, the quantification of elasticity is the common factor in lift operations and in SPMT operations; therefore special attention concerning stability is necessary.

The content of this article is intended to provide a general guide to the subject matter. Please contact us for specialist advice about your specific circumstances.

This article was also published in the November/December edition of HLPFI magazine. Read the online version here. 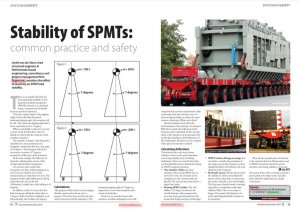 Cranes on barges: How to decrease the risk of tipping