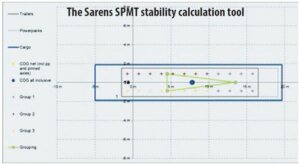 Sarens recently released an updated version of its SPMT stability calculation tool. It has been designed to evaluate static and dynamic axle loading and tipping angles, as well as ground bearing pressures and trailer bending.

First introduced two years ago as the Sarens Transport Calculation Sheet (STCS), the company has used the tool for its special transport operations. It has since been
updated to apply to larger projects, as well as the various ranges of SPMTs.

Peter Huygebaert, engineering manager at Sarens, said: “Besides the static and dynamic axle loading and tipping angle evaluations that the old tool could perform, the new sheet also allows us to easily pin-up axle lines and evaluate ground-bearing pressures and trailer bending.

“The old tool could be used after a drawing of the transport had already been made, and so was missing a visual interface. The new tool lets us visualize the SPMT configurations and saves considerable time.” The newer version of the STCS also evaluates dynamic forces, such as accelerations and wind, in an even more detailed manner.

For the development and testing of the updated STCS, Huygebaert said Sarens started from a clean sheet “in order to not be bound by the restrictions that the old tool had”. The company then started trialing the new tool on specific projects, before it was launched to the entire Sarens Group.

What do barges and SPMTs have in common? More than you think, according to André van der Steen at Eager.one – a Netherlands-headquartered provider of consultancy, engineering and construction design services. In both cases, stability is a crucial parameter to be aware of and, according to Eager.one, adding up ‘elasticities’ is essential.

Specifics such as mass and center of gravity are crucial to determine and van der Steen said that these calculations can, in some cases, be quite complicated to work out. He said: “In cases where stability is not the greatest issue, you may decide on stability by one of two simple rules of  thumb.” They are:

However, during operations in which stability is a critical issue, these simple rules do not suffice. In these cases, it is necessary to quantify all elasticities that play a role, he explained. The quantification of elasticity is the common factor during lifting operations and in SPMT operations. But, how do you determine all elasticities from top to bottom?

Once you have quantified all elasticities and all external influences, such as wind, moments, and other forces, you can calculate all movements and rotations of the operation, said van der Steen. “These movements can easily be judged as  acceptable or not. This establishes a clear basis for operations in which stability is critical.”

The content of this article is intended to provide a general guide to the subject matter. Please contact us for specialist advice about your specific circumstances.

This article was also published in the May/June 2019 edition of HLPFI magazine. Read the online version here.

Cranes on barges: How to decrease the risk of tipping