Sometimes, when a crane is purchased, it is not yet suitable for the work for which it has been acquired. This was also the case for a M4600 Ringer crane, which was purchased by HAPO.  The intended use of the M4600 Ringer crane was to be operated on a pontoon as well as on jack-up platform “Lisa”. But without major adjustments, a land based crane cannot be operated offshore.

After purchasing the ringer crane, HAPO contacted Eager.one with a request for engineering capacity for this far-reaching modification. A very challenging project, where several unexpected choices had to be made along the way.

Start of the Crane Transformation

The crane transformation project started off with the idea to design an interface frame. This frame would be used to move the complete crane on a pontoon using SPMTs.

In the initial plan, the complete M4600 would be maintained as a basis, including the undercarriage. But as the design progressed, it turned out to be better to completely remove the undercarriage and make a strong structure on which the upper carriage could be placed. 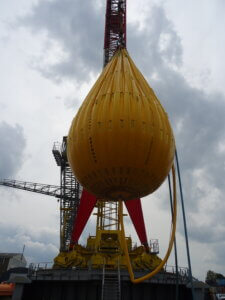 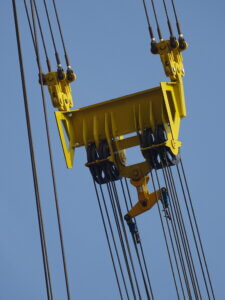 Calculations showed that the width of the boom foot was insufficient to absorb the varying loads at sea. Therefore, the decision was made to ‘cut open’ the boom base and to place the boom hinges 9 meters apart. This also made it possible to double the bogie sets, resulting in a better load distribution.

Also, a completely new ring construction had to be designed. And due to the state of maintenance of the original crane, it was decided to replace the upper carriage. A major adjustment, but this also made it possible to convert the crane drive to electric. The power supply is provided by an HPU at the bottom of the base frame.

The construction and conversion of the crane was carried out by PLM Cranes. Together with Eager.one they also took care of the formal delivery under CE. The crane has been renamed to PLM15000E.

HAPO’s wish was to try to maintain the original capacity chart. To be able to do so, Eager.one engineered the reinforcement of the entire boom and verified all load carrying structures.

In the end, after the complete crane transformation, the results are impressive:

The crane has been successfully inspected and overload tested. Subsequently it was driven onto the pontoon, seafastened and taken into operation. 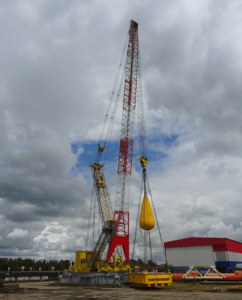 A crane system offers the possibility for single blade exchange